Heading for the hills: A day out in Saltaire 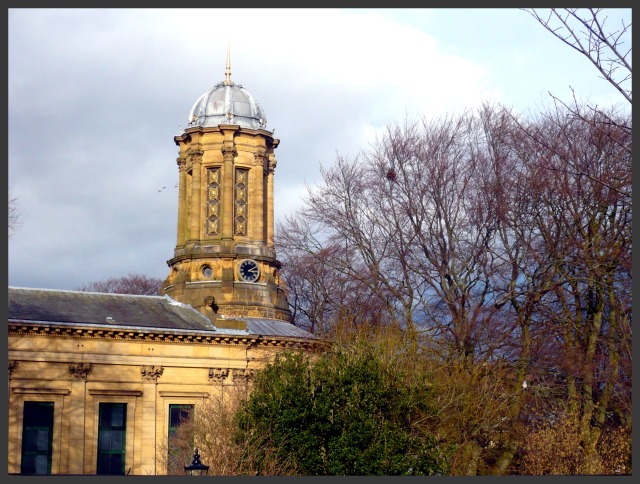 I’d love to go and see the David Hockney: A Bigger Picture exhibition currently on at the Roya Academy, but I can’t see me getting the opportunity. Instead we decided to to take a trip to Saltaire yesterday and check out the collection of David Hockney works exhibited at Salt’s Mill.

Saltaire is a UNESCO World Heritage Site – a textile mill and model village built after textile manufacturer Titus Salt made the decision to move his business and employees a few miles away from the pollution of Bradford for cleaner air and greener surroundings. It was completed in 1876 and when production stopped in the 1980s, the mill was converted into a gallery exhibiting the work of Bradford-born David Hockney.

The mill was out first port of call – we parked easily in the large, free car park after a 45 minute journey form Manchester. David Hockney is the kind of artist I’d recommend for young children (CJ is nearly five) as a lot of his works are large and colourful and a feast for small eyes – and grown-up ones obviously.

25 Trees is the new show by David Hockney on the 3rd floor of the mill, showing vivid portraits of Hockney’s friends and family, as well as i-pad and i-phone works in the projection room and some 27-foot long pictures of trees produced using photographs.

When CJ had had enough of admiring the artworks we had a look at the excellent bookshop on the second floor. There are three cafes here which looked very inviting, but had queues when we visited, so we headed into the village and ate at the Victorian Tea Rooms there before having a mooch around.

There are many impressive buildings ,as you would probably expect from a World Heritage Site. Above is the Grade 1 listed United Reform Church, just opposite the mill.

We had a wander up Victoria Road and I had a little look in Rose and Brown, a lovely vintage shop…

We crossed over the railway line and the canal… 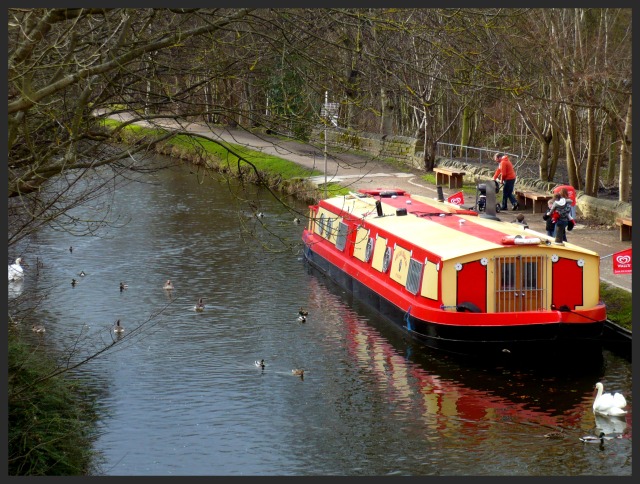 And into the recently restored and voerhauled Roberts Park. You knew there’d be a park didn’t you? And what a beautiful park it is. As soon as CJ caught sight of the playground, she was off. It has a spectacular setting, opposite the mill itself.

A very impressive playground, with lots of lovely features like a wooden playhouse and some skate ramps populated by lads on scooters. But CJ’s favourite? The very cool trampoline! 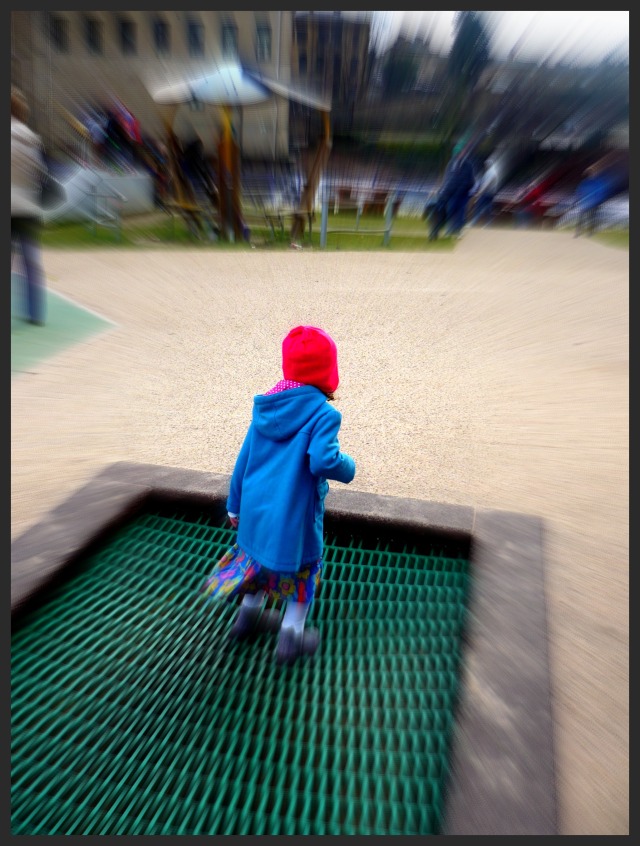 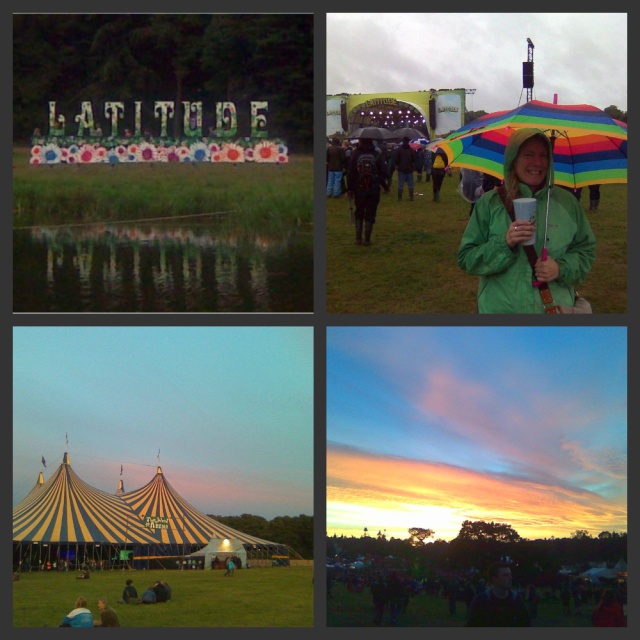 Apparently there was a drought in east England last year. Well, not when I visited for the Latitude Festival there wasn’t. That’s me, grinning through gritted teeth and gripping a pint as though my life depended on it.

It’s around this time of year that festival organisers start to drip feed tempting titbits about their summer lineups. It’s making me cast my mind back to last year’s experience, which was fab despite the grotty weather, smelly mud and epic four hour car journey (which would have been bad enough, but yours truly was the driver).

I was persuaded that Latitude is the way forward by my best friend, a Latitude veteran who recommends the mix of music, literary events, cabaret and comedy. As ever, her advice was impeccable. Our highlights were The National, Bellowhead, the ‘Instigate Debate’, and Dr Brown, a cabaret artiste who speaks not a word but does unspeakable things with apron strings.

The setting of Latitude is just beautiful and if  I do go again, I’d really like to make time for a trip to the nearby seaside resort of Southwold. It was a very long way to travel from Manchester though, so maybe I’ll try to find a festival a bit nearer to home this year.

The 2012 Latitiude lineup will be announced on March 5th. I’ll have to have a sneaky look, and who knows? I may just be tempted…

Are you stuck for something to do tomorrow? I love the sound of this event, but sadly I will be stuck teaching a lesson about David Lloyd George. If, unlike me, you can get to Manchester’s Piccadilly Station at 11am on Friday 17th, then don your wings, grab your wand and get ready to dance. And possibly to get a few strange looks, but don’t let that spoil your fun.

This slither of whimsical fun is being put on by the organisers of Spellbound Forest, an event being held later in the year at one of our favourite haunts Delamere Forest in Cheshire. It promises to combine “theatrical performance, music, visual art and dance” all in a stunning setting. Sounds right up Parklover’s street!

As it’s another teeth-chatteringly cold weekend in Manchester, I thought I’d share some photos from a couple of weeks ago – along with a suggestion for somewhere to cosy up with a tasty lunch before wrapping up for a wintry walk.

The Chetham Arms is in a picturesque village on the outskirts of Bolton. We sat near one of the fires and tucked into delicious fish and chips – children’s portions of several of the main courses are available, so it was fish and chips all round.

A track leads off from the car park at the back of the pub. We followed it all the way to the level crossing over the railway line, then headed through the gate on the left onto a footpath and up onto the moors. Peace, quiet and panoramic views. We even caught some late afternoon sun before it started to disappear behind the hills.

A cosy lunch followed by a bracing stroll – ideal as long as the snow doesn’t stop you from getting up in the first place!

If you’re anywhere near Bury on Friday 14th October, you have to check out Bury Light Night. This new event sounds fantastic, with masses going on around the town centre. Personally, I’ll be heading to Kay Gardens to look at the lanterns and listen to some acoustic tunes, then on to Crompton Street for the promise of wild street performers and a candle lit labyrinth.

Alas, I won’t be there in time, but if you get into Bury by 6pm, get your pencils out and join Becca Smith’s urban drawing tour. If all that hasn’t taken up my entire evening, I’ll be popping into the Art Museum to listen to Black Jack Barnet’s specialy written songs and then calling in at the Teepee in Library Gardens.

If it happens to rain on friday, there’s plenty to do indoors, but of course the outdoor fun is the priority for Parklover so it’s wellies, raincoat and brolly for me.

Check out the details of all events on friday night on Bury Light Night’s webpage.

Posted on September 4, 2011 by Parklover

What could be better on a sunny sunday afternoon than some al fresco beats, beers and bunting?

We stumbled upon this fab street festival today in Manchester’s Northern Quarter. The action is going on in and around Edge Street, Thomas Street and Tib Street until 9 tonight, entry is free, and there is outdoor eating and drinking aplenty.

If you can’t get down to the Northern Quarter tonight but like what you see, pay this area a visit soon for vintage boutiques, independent bars and tasty tea and cakes. 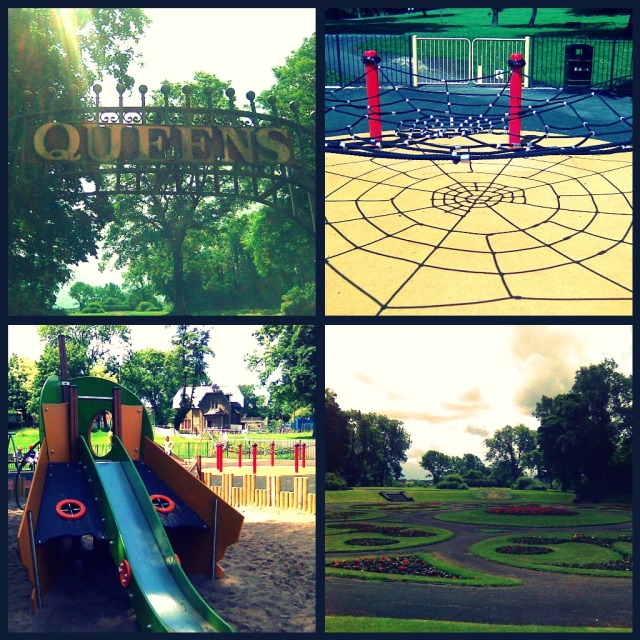 Clearly benefiting from a lot of recent work and investment, Queen’s Park is a mere skip from the centre of Bolton.

A great playground for the kids, some lovely flowerbeds and some very steep hills for those of you who like to keep yourselves fit.